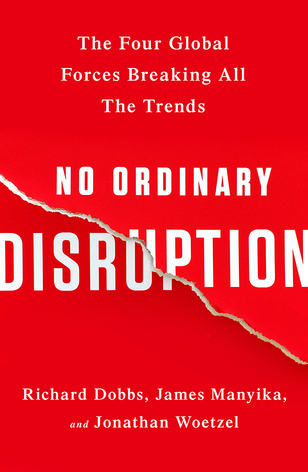 I mentioned in a previous post about how one of my colleagues Orin Thomas is a prolific reader and every time I talk to him, he suggests more books that I should read. Another one in that category was No Ordinary Disruption One by Richard Dobbs, James Manyika, and Jonathan Woetzel. The sub-title is The four forces breaking all the trends.

The authors claim that our intuition on how the world works could be very wrong. I suspect that the degree of change in the accuracy of our perception is a recent, and accelerating thing. In the book, they are summarizing years of research they have done at the McKinsey Global Institute.

It's amazing today how many businesses that have been large, solid, and around for a long time, are suddenly almost swept aside by relatively new competitors. Suddenly, the world feels different. It is going to be very, very different.

What I particularly like in this book is the way that they've analyzed what's going on in China. The rise and rise of Chinese technology is a passionate interest of mine, and I'm surprised how little attention it's getting in the West today. I think we ignore it at our extreme peril, particularly financially. So many things that I see going on in China are so very disruptive. I hear people scoff at some of the quality of what they're doing, but I heard exactly the same thing about Japanese products in the 1960's and 1970's. By the 1980's, everyone was taking notice of the Japanese.

If you don't realize that technologies that are now constructing skyscrapers at three stories per day (yes 57 stories in 19 days), and others that are 3D printing entire houses, are going to be here in the near future, you aren't watching what's going on.

What we in the West aren't seeing is where the real growth is going to come from in the future. An example they give is that a single regional city in China (Tianjin) will have a GDP as large as Sweden by 2025.

I loved the way that the authors note that cities that most executives would be hard pressed to even find on a map today, will have most of the economic growth in the next decade.

The four main trends that they've mentioned are a big shift away from North Atlantic trade, across to emerging markets; the way the world is aging; the effects of ongoing urbanization; and obviously, the impacts of technological change.

But it's not all about China and emerging markets. There are other significant disruptions taking place. For example, who, in the 1980's, would have tipped the USA as the world's largest oil producer, rather than some countries in the Middle East or Russia?

The first chapter contains the essence of the book. It's a fairly straightforward read, and covers the main points of the whole book. The rest of the book is a much heavier read, with all the statistics and analytics, but interesting nonetheless.

My main concern right now, is that the upcoming disruption is very different to anything we've seen in the past, and we're nowhere near ready for it.

This book is interesting and it's another one that I'm glad Orin suggested to me. I have a deep interest in these things, and this was yet another set of opinions that were worth considering.