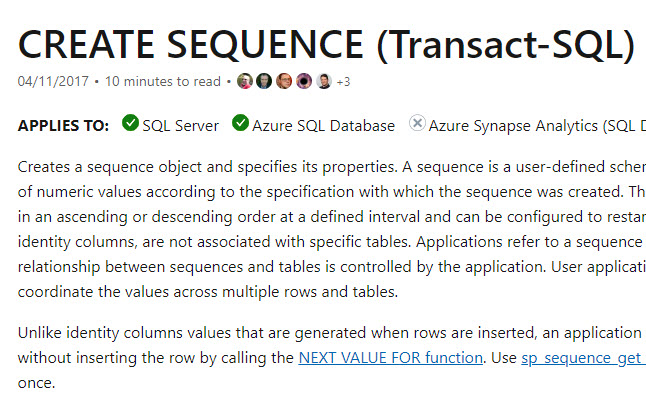 I posted the other day that I don't like negative ranges used for IDENTITY columns. I feel the same about the range of values for sequences, but when I mentioned that I prefer using sequences, a few friends asked why I preferred them.

Let me start by saying that I was surprised with the previous post, that the strong responses were about using natural vs surrogate keys. That had nothing to do with what I was discussing, and is an endless topic for another day. The issue was about when someone has already decided to use an IDENTITY or a sequence. And so, the same point applies to this discussion.

IDENTITY columns have been around forever in SQL Server. They are convenient, but they have limitations.

They are documented here.

Sequences have been part of SQL Server since SQL Server 2012 and they are documented here.

People often wonder about performance. Basically it's the same if the caching is the same. Caching is used for both but you have more control over caching for sequences. For caching of IDENTITY values, SQL Server 2017 and later, and Azure SQL Database have an option to set IDENTITY_CACHE = ON | OFF.

Caching can lead to gaps on restarts, failovers, etc. You shouldn't assume that either won't have gaps. Disabling the caching of IDENTITY makes that less of an issue. If you want to do that at the server level, Trace Flag 272 can be set to get the same outcome.

Basically, apart from being directly part of the table definition, I now don't find any redeeming features about IDENTITY columns. I use sequences all the time.

2 thoughts on “SQL: Why I prefer sequences to IDENTITY columns”