For example, if you had a report open in the VS2017 report designer, this menu was present:

And if you had an AS model open in the VS2017 tabular designer, these menus were present:

And similarly, if you had an SSIS package open in the VS2017 designer, these menus were present:

How it now is

Now, when you open VS2019, no matter which of these you have open, you won't find those menus.

So where are they?

They're all hidden within the "EXTENSIONS" menu as these designers are all "Extensions". And if there were multiple menus, they're all in there separately: 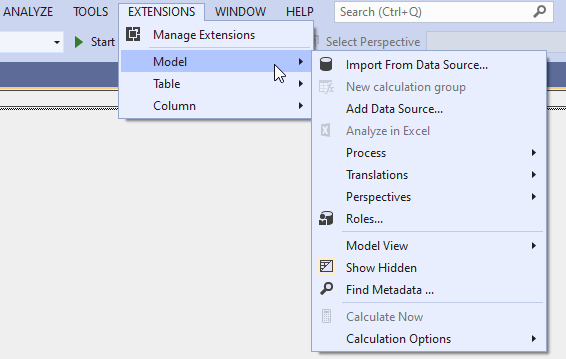 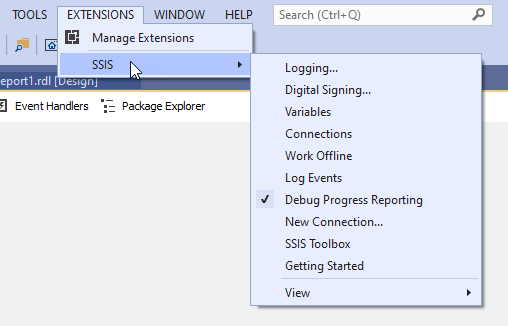 I think this is a lousy idea for multiple reasons.

First, it means that when you're working on an object like a tabular data model, your menu bar is full of things unrelated to what you're working on, and the relevant menu items are hidden multiple levels down under "Extensions".

While I understand they're probably trying to keep the VS menu bar consistent, many people working with these projects could not care less about the rest of VS. That's just where these designers happen to be.

For the life of me, I can't see how that's good UI design.

Second, it makes the decades of blog posts and articles that have been written about these tools incorrect, and much harder to follow. The pain from this is hard to describe, and it's felt most by newcomers who will just be puzzled and not know what's going on.

I'd love to hear your thoughts. If you agree with mine, please tell Microsoft as well. I really hope they reconsider this.