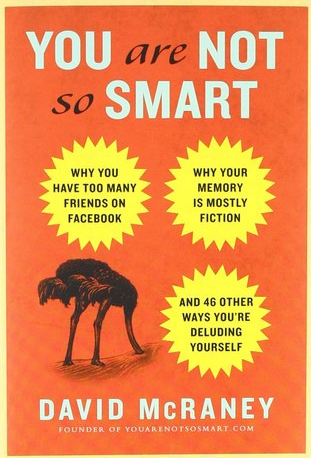 About a year ago, I attended a conference called DevOps Days in Newcastle, Australia. I wish I'd liked the conference more. But one of the memorable things from the conference was a keynote by David McRaney.

All the people around me seemed to find David's keynote interesting. Ironically though, I also heard many of them wondering what on earth it had to do with the conference topics. David provided example after example of how we all suffer from confirmation bias. I enjoyed his keynote.

So when I saw he had a book entitled You are not so smart (and subtitled Why You Have Too Many Friends on Facebook, Why Your Memory Is Mostly Fiction, and 46 Other Ways You're Deluding Yourself), I was intrigued to read it.

Like I was with the conference, I ended up with mixed feelings about this book. I saw a comment that said it was "a populist introduction to psychological delusions such as cognitive bias", and I think that's pretty accurate.

A big problem for me is that I listened to it as an audio book, and I wish they'd used a different narrator. In fact, I wish David had narrated the book himself. He has a wonderful sarcastic sense of humor, and that didn't come across with the narrator reading the book.

The book provides example after example of how we delude ourselves, and very importantly, how our memories are so very poor, no matter how much we trust them.

I really was hoping for more in-depth discussions on findings, etc. but I suppose the book is targeted at the community at large.

Mind you, after going through the book, it's quite clear how mass ignorance continues to be such an ongoing problem. In one reader's comments, I read that David Sirota (the author of Back to Our Future: How the 1980s Explain the World We Live In Now) had said that "Anybody still self-aware enough to wonder why society now worships wilful stupidity should read this book". That's probably a fair call.

I enjoyed some of the stories in this book, but not all. It does offer a good introduction to cognitive biases, particularly confirmation bias in an easy to consume format.