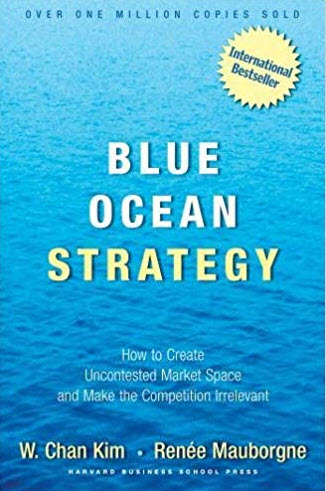 Another fairly famous business book that I've read lately is Blue Ocean Strategy: How to Create Uncontested Market Space and Make Competition Irrelevant by V Chan Kim and Renee Maubo. Apparently over a million copies of this has been sold.

I really liked the basic premise of this book. It describes how most companies keep looking at what their existing customers want, and often that's in what they call a red ocean ie: where all the sharks are fighting and tearing things apart.

The book talks about techniques you can use to try to escape from the melee in the red ocean and to try to find clear blue ocean. Part of the strategy involves dwelling on people who aren't your current customers. Why don't they deal with you? Can you change that?

Overall I liked the book but it does suffer from having dated a bit now. I nearly burst out laughing when going through the section on the F-35 Joint Strike Fighter and how it solved a set of problems so nicely, cut the budget enormously, and would be airborne in 2010.

Nothing could be further from the truth. And I found a number of examples like that throughout the book where the authors thought something was either wonderful or would go onto glory, but time has shown the opposite.

However, the basic concepts in the book are still valid; it's an interesting discussion; and I'm sure it will have you reconsidering many aspects of your business if you run one.