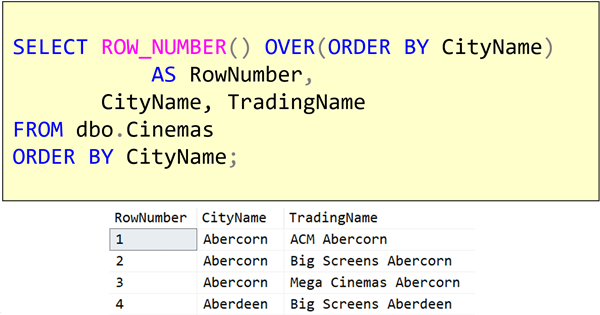 In SQL Server 2000 and earlier versions, I often heard people ask "How do I output a row number beside each row that's output in my query?"

I remember some people arguing that it wasn't a valid request, as it didn't feel "set-based" but it was an appropriate request, and it could be dealt with in a set-based manner. Sometimes it's very, very useful to be able to do that.

In SQL Server 2005, we got the ROW_NUMBER function, and it did just what people were asking for. You got your normal query output, but also got a column with 1 for the first row, 2 for the second, and so on.

That would have created row numbers based on the order of the CinemaID but the query would have output rows still in CityName order.

Note also that there was nothing special about the column alias (RowNumber) that I used. That could have been any name.

ROW_NUMBER was a powerful addition to T-SQL, but it was only the first of a set of window functions that were added to the language. We'll see more in later posts.