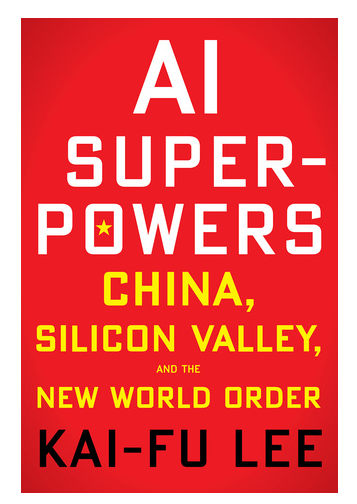 I haven't been doing as much driving in my car lately, so that's limited the time I've had for listening to audio books. But one that I did complete recently was AI Super Powers by Kai-Fu Lee. The subtitle is China, Silicon Valley, and the New World Order.

This is an area that I've been really passionate about for the last few years.  I can see AI changing so much of our current world, and much sooner than I think most people will realise.

It was interesting to hear the opinions from Dr Lee as he's got a fascinating background.  He effortlessly blends his Chinese background with his American background. He's worked for many of the companies who are directly involved: Microsoft, Google, Apple, etc., has headed up large AI teams and is a cancer survivor. These things all give him quite a unique perspective.

He provides a pretty frank discussion of where AI is today. Importantly, he covers the big breakthroughs, and says that the last real breakthrough was Deep Learning. There might be another big breakthrough one day, but everything else since has been just incremental improvements.

He contends that AI will determine the balance of the world going forward. And he sees that whoever owns the data, will own the best outcomes. Increasingly, that's China.

I've seen criticisms of the book, but mostly from US readers who think Dr Lee is a little too biased towards China but I honestly think they're missing a bigger picture.

I think he's right. If you've watched the startup scene and the passion of young Chinese business people who have survived the cut and thrust of their local market and economy, you'll see abilities that I just don't see anywhere else.

It's not something that's covered in this book, but as an example, I read recently that young people in the USA are far less likely to start a new company today, than their forebears were in the 1960s. That's concerning. There are many reasons for that but I suspect that younger people in the USA have a far more comfortable existence without taking the risks that these young Chinese do. And another large reason, is that health coverage in the USA is so broken, that I see would-be entrepreneurs (of all ages) stuck in the wrong jobs because they aren't game to leave their employer-provided healthcare.

He finishes out the book with a section on Universal Basic Income (UBI) proposals. That seems to resonate well with the Silicon Valley companies, but from what I've seen, welfare-dependent societies (which is what this would be), never seem to turn out well.

I really enjoyed this book.  If you have any interest in the future of the world and of work, this is a compelling book.