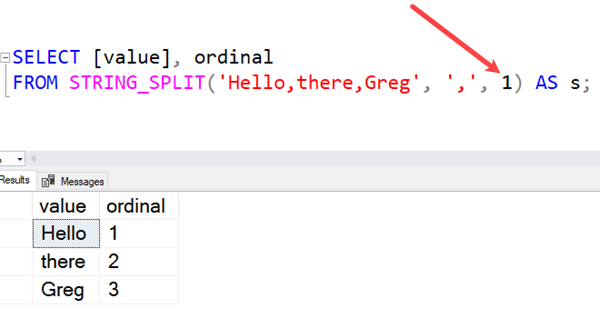 I get pretty excited about new T-SQL enhancements. Back in 2016, I was so pleased to see Microsoft finally add a string split option to T-SQL, but my enthusiasm was limited when I saw how it was implemented. Now that's mostly fixed !

While it's possible to build functions that did string splitting just like I wanted, the problem is that no matter how you implemented them, they were really just too slow. And most importantly, much slower than a built-in function would be.

SQL Server 2016 allowed us to write code like this:

That code would return this output:

STRING_SPLIT is a table-valued function. It took two parameters:

It returned a set of rows with a single column called value, and it was fast.

So what were the problems?

Now a TVF returns a table, and tables don't have built-in orders either. Nor do views. But what was needed was another column that told you which rows was which, and you could then use that for ordering when needed.

STRING_SPLIT in Azure SQL Database now has an optional parameter to enable an ordinal (i.e. a position).

That extra parameter is a bit or an int that says if an ordinal value should be added to the output.

I love working with Azure SQL Database for many reasons, but one of those is that you get new language extensions before other parts of SQL Server. I've been using this feature since the day that I first heard it existed, and it's working great. Now the updated documentation is online as well.

It also means that I can obtain any specific token that I want. For example, get me the third token in the string:

This is a much-needed enhancement.

6 thoughts on “Azure SQL Database now has an improved STRING_SPLIT !”