The rich set of data types in SQL Server and the T-SQL language are great. But sometimes, you need to change a value from one data type to another. The output from the commands above is: 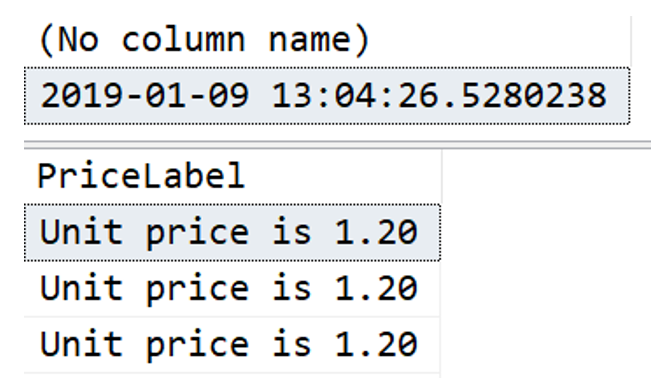 ANSI SQL provided a way to do this.

CAST is the ANSI SQL way to convert from one data type to another. The syntax is basically:

And you can use it where you would have used an expression or constant.

In the second example above, I wanted to select the UnitPrice of each product, but I wanted the output as a string, and with "Unit Price is" prepended to it. If I hadn't used the CAST, I would have been adding a number to that string.

Note that in this specific situation, T-SQL would have coped with the different data types on each side of the + sign, by "implicitly" casting the number to a string first. But that's not always the case and you shouldn't depend upon it. Make sure you convert data between data types explicitly.

T-SQL has another way to convert data from one type to another.

CONVERT is a non-standard extension to SQL. It's an old Sybase function that's been around as part of T-SQL ever since it started.

With CONVERT, the order of the parameters is different:

We'll see in the next post how CONVERT can do more than CAST, by allowing control over how the conversion occurs. And later we'll see how to avoid errors during conversion.