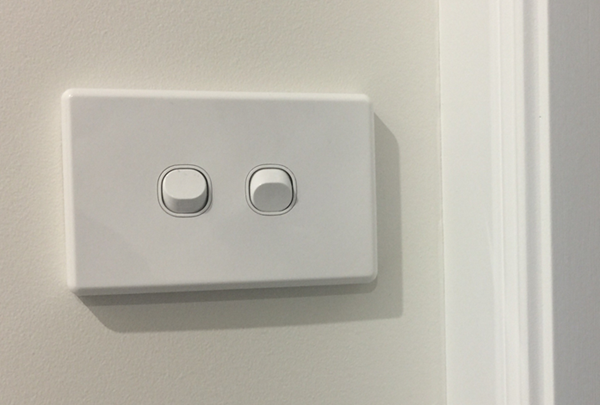 We had a new house built a while back, and in a few rooms there was a double switch: one for the light and one for a fan.

But which is which?

Now the old way to do that would have been to put a label on each one. Seems like a reasonable idea but unless that's a braille label, and you can read braille, that's not going to help you in the dark. You want to just reach in and turn on the correct switch. That's easy enough to do, but it really only works if the electrician who installed them followed a pattern i.e. the switch furthest inside might be the light, and the one closest to the door might be the fan.

If you only had one room like this, it mightn't matter much, but if you have several rooms, you'd hope they're done the same way in each.

And that got me thinking about someone who does it the same way each time, and someone who doesn't. A licensed electrician might install it safely, and both switches work but a more professional electrician would check not only that it works, but that it was done in a consistent way, throughout the house, and throughout all the houses that they worked on.

When I see someone who installs things differently in different parts of a house, it leaves me with an uneasy feeling about the overall quality of their work. It's a clear indication of their lack of attention to detail. There might even be a standard for how that should be done. If there isn't, there should be. So perhaps there is a standard and they didn't follow it.

For a number of years I worked as an engineer for HP, in the fun days where they had the best commercial minicomputer systems in the industry. That involved working on large pieces of equipment (including some that were quite scary to work on), with an enormous number of pieces and screws to hold them together.

If I ever started to work on a piece of equipment, and found screws were missing, even if they were where the customer wouldn't see them, I got a really bad feeling about whoever worked on the same machine before me. Fortunately, I generally knew that whoever did it was unlikely to be based in our office, as the engineers doing work out of our office were meticulous about that. It was an unwritten rule about doing quality work.

And so the same things apply to development work. Are you hacking together something that works? Or are you aiming for more than that?

When someone needs to do further work on a project that you worked on, how will they feel about it?