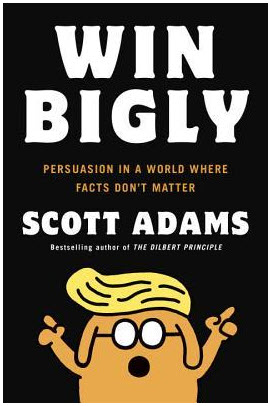 In the past, I was an unashamed fan of the Dilbert cartoon strip. In recent years though,  the author (Scott Adams) has become a pretty divisive character in and around US politics and life in general. So I was intrigued by his book Win Bigly.

Nowadays, I keep hearing many people refer to him as being very pro-Trump and in the opinion stakes, that immediately cuts him off from half the US population, and the majority of the world.

The other issue that's constantly raised in relation to him is around his attitudes and opinions on sexual abuse, etc. I won't comment further on those here as I wanted to focus on the book. (I'm sure many others will though as he's widely despised by many in relation to this).

So I didn't know what to expect with this book.

Adams has a curious background. He says he's a trained hypnotist and says he's also a lifelong student of the art of persuasion. (Hypnotist seems a pretty ill-defined "profession" to start with). But he was one of the earliest public figures who were suggesting that Trump would win the US election. That alone made him a lot of enemies, but he wasn't alone. I remember watching an interview with Mike Moore who thought it was likely when so many others did not think it possible.

I see the book from two different viewpoints:

The book is a pretty articulate break down of how Trump used persuasion tools at a master level, and how he applied them when most of the mainstream media (and his own party) viewed him as a bumbling sideshow.  Adams mentioned how this related to what he saw with Steve Jobs years ago.

I found it fascinating to read a breakdown of the tools used to convince people, how the rules of media exposure were completely broken, and how he applied kill shots that were far more important (sadly) to the audience than facts.

Anyone dismissing the book out of hand (and many will based on who wrote it), will miss some things that are of interest to people in politics or marketing.

The second viewpoint is that Adams seems to have burned a lot of bridges around town, and the book reads a bit like a rewriting history in trying to explain his previous actions and viewpoints.

That aspect of the book really grated on me as I thought it was a case of "methinks he protests too much". I found that part overdone and made it all a bit unbalanced.

This book was very interesting in parts but left me feeling a big uneasy. I'm still struggling to know what I really think about it. But it did make me look at Trump differently (not in a good way but with more understanding of his techniques).