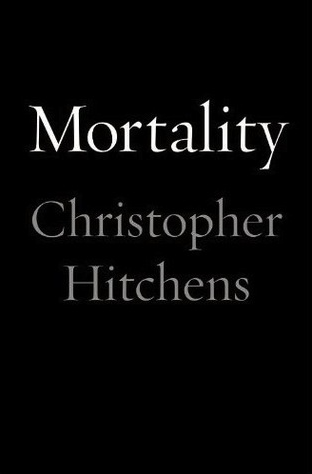 I know that many people found Christopher Hitchens a divisive character. Mostly that's because he very openly, directly questioned, and at times ridiculed, long-held beliefs about religion and about inappropriately revered people. He did not (as the old saying goes) suffer fools gladly. I read Mortality quite a while ago and wanted to wait a while after his death to see how I still felt about it.

Hitchens was diagnosed with esophageal cancer in 2010 while on a book tour for Hitch-22. Hitchens died in December 2011.

While acknowledging his rough edges, I was an unashamed fan of Hitchens' work. His writing on religion was incisive, but his writing on politics and culture was masterful.

So many religious leaders say that when facing death, people often find religion, even if they hadn't done so before. They used to say that "there are no atheists in the trenches" during the first world war. Many thought he would embrace the apparent solace that religion might offer, as he came closer to death. That wasn't ever the case.

With COVID-19 wreaking havoc throughout the world at present, reflecting on his book on mortality is timely. As he was slipping away, he was most worried that he might lose the ability to express himself.

While I don't think this was Hitchens' best book, it's still a wonderful poignant read. It's a practical guide to what we're all going to face one day. Compared to his other books, Mortality has a gentler tone. Critics mistake him for being negative, but that's just usually because he was challenging them. On the contrary, Hitchens loved life and his friends and family deeply.

A focus of the book is his experience of dying from cancer but unlike the books of many who are facing their own mortality, you won't find a trace of self-pity.

Hitchens' wife noted in the afterword that "Christian always has the last word". Given this was published posthumously, I'd say she was right. Although, I loved her little jibe:

"My husband is an impossible act to follow. And yet, now I must follow him. I have been forced to have the last word."

This isn't a long book. It's basically a short book of essays. It's hard to believe he managed to write it. I found reading it to be really moving. If you find yourself contemplating your own mortality at present, you could do worse than read this book.