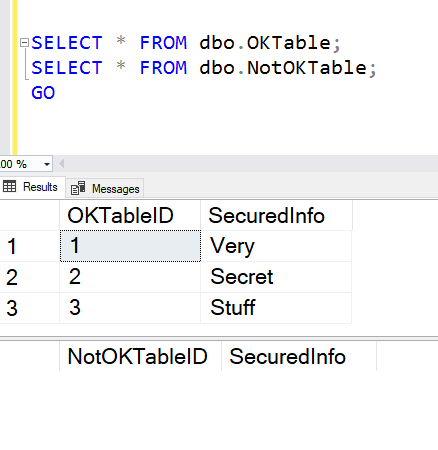 There was an interesting question in the forums the other day. The poster wanted to be able to put entries in a table to determine who could access data in the other tables in the database.

There are two basic ways to do this. If you want an error thrown, you'd be best just using GRANT/DENY/REVOKE as permissions and not using your own table to control it. However, if you want no error, but just no data, then the Row Level Security (RLS) added in SQL Server 2016 could do the job. Let's take a look:

We'll start by creating two tables: one that I'll later be able to access and one that I won't:

Next we need to create and populate the table of who can access what:

Notice that I've placed it in a separate Security schema to make it easier to control who has access to all the security-related code and objects.

Then I create a function that determines if permission is granted:

The function checks if the logged on user has an entry for the table (schema name and table name used to identify the table).

Note that I've used the USER_NAME() function to find out who's logged on. It can be susceptible to impersonation issues so you might consider making it logon names instead of user names and using the ORIGINAL_LOGIN() function instead. But this will do for now.

Next, I apply the RLS security policy to every table:

You can find out more about Row Level Security here.

4 thoughts on “SQL: How to control access to SQL Server tables by entries in another table”