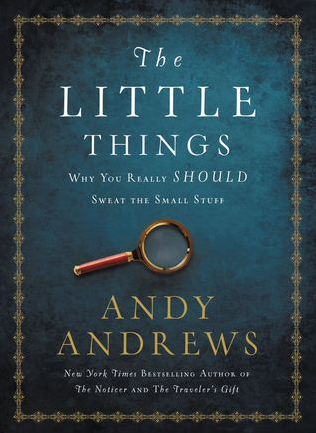 The title of this book caught my eye. I'm sure it's intended to be a play on the title of  Don't Sweat the Small Stuff and it's all small stuff: Simple Ways to Keep the Little Things From Taking Over Your Life by Richard Carlson. I reviewed that book here.

So this one is The Little Things: Why You Really Should Sweat the Small Stuff by Andy Andrews.

Andrews tends to write small (and short) books that get pretty much to the point. This one also does the same. I saw a large number of people taking about how much they enjoyed it, but for me, it fell flat. In Carlson's book, there were great messages about how easy it is to have your life overcrowded, particularly with things that in the end really don't matter.

Andrews takes the opposite view that so many of these little things really are critical. He spends ages talking about how an air rifle played a key part in the Lewis and Clark Expedition, and how a handful of nails was critical in the Battle of Waterloo.

We've all seen situations where significant things fall apart for the lack of attention to small detail. And Andrews clearly shows examples of this.

It's a pretty quick read, and at least he doesn't belabour the points.

I just ended up feeling pretty unconvinced, but noting other reviews, I seem to be in the minority. I just didn't find any real revelations here.