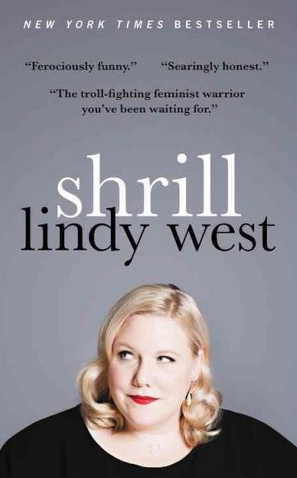 I've also tackled a number of non-technical and non-scientific books recently. On that I'd heard good things about was Shrill (Notes from a loud woman) by Lindy West.

First note about this book is that it's full of NSFW (not suitable for work) words, so be warned if that would offend you.

As well as being loud, Lindy has spent her life being big. I'd say that's shaped her world view as much as anything else. Having been big much of my own life, I can directly relate to so many things she says.

Weight is one of the last great "acceptable" forms of discrimination in the world today. That's largely because when doctors and others haven't been able to cure it, they have to blame someone, so they blame the victim, and presume they must have just eaten too much, not exercised enough, or just don't have any willpower. Yet of my many friends, the heavy people that I are often the ones with the strongest willpower, and often excelling at every aspect of their lives except weight. One day, society will come to understand that obesity is an illness, and I think largely caused by excess carbohydrates, even though that's exactly what stupid guidelines have told us to eat over the years. But I digress.

Lindy had me almost crying at times, yet laughing so hard at other times. An NPR review called her "our fat, ferocious, and funny avenging angel". I'd put that as pretty close to the mark.

She's dealt with appalling situations and managed to still come back out with a sense of humor. It's surprising that she still has  decency towards those around her.

I liked it. She's brash and loud, willing to challenge stereotypes, and tackle nonsense head-on.