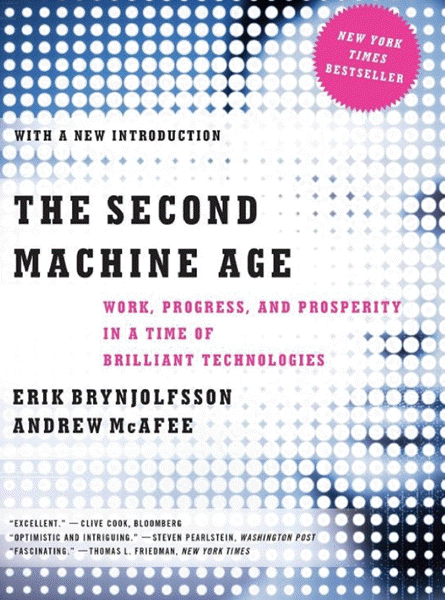 One of my colleagues Orin Thomas is a prolific writer. I've lost count of how many detailed books he's written, and I've no doubt he's lost count as well. If you've worked in Microsoft-related IT for any length of time, I'm sure you'll have read one of his books, particularly if you've been involved in certification. You can see a partial list of his books here.

But the other thing that amazes me about Orin is that he's also a prolific reader. I can't believe how many books he gets through, and he's inspired me to get through way more. I have not the slightest doubt that being a good reader is a prerequisite for being a good writer. Every time I meet with Orin, he mentions books that I should read. I note them down, and slowly make my way through many of them.

Based on my interest in where I think society is heading, one of the books that Orin suggested was The Second Machine Age: Work, Progress, and Prosperity in a Time of Brilliant Technologies by Erik Brynjolfsson (Author), Andrew McAfee.

I grew up in an age where I wasn't worried at all about the future job market, and in the future of work itself. But the work and study that I've been doing in recent years has changed that. I really do see a period of major social disruption coming. I think if you're not seeing that, you're not really looking.

Whenever we've had disruption in the past, the scale has been much, much lower. "We don't have massive pools of unemployed scribes" is a comment that I often hear. But the disruption that I see coming is very different to what we've had in the past. Today, in my country, there is a major upset if a couple of hundred people lose their jobs at a car plant, even though that was entirely predictable since about 1992 when the government set the industry on a new direction.

In the future though, I can see single decisions sidelining a million people at a time. We're just not ready for that.

This book is an excellent source of material for you to consider. It goes through economic data and positions where technology is and where it's taking us. It argues that we're in the middle of a second era of staggering innovation, and that it will affect us even more than the first machine age did.

After convincing us of how amazing all the technology is, the authors then discuss how the increased prosperity is only shared by a small percentage of the population. I'd argue that it's heading towards a minute percentage. The prosperity won't be spread across the community, and particularly not to the people at the lower economic levels.

This book is interesting and challenging and I'm glad Orin suggested it to me. I have a deep interest in these things, and this just helped add to that.