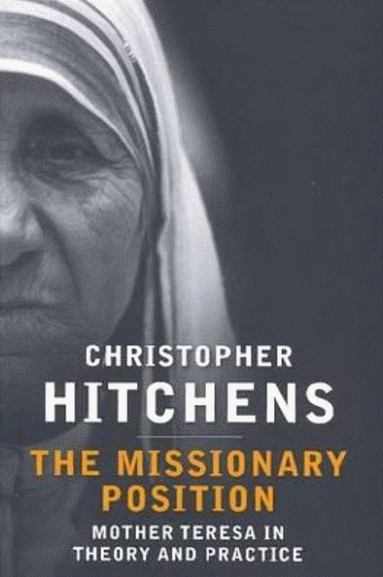 When I was growing up, we were endlessly shown Mother Teresa (now known as Saint Teresa of Calcutta by Catholics) as an example of a person who had devoted their life to the service of others, and did so in appalling situations. I knew that the myth surrounding this woman was very different to the reality and I'm surprised that I hadn't previously read Christopher Hitchen's book: Book Review: The Missionary Position: Mother Teresa in Theory and Practice.

An excerpt from the first two reviews on Amazon sum up this book pretty well:

sterlingAg said: "You don't have to either love or hate Mother Theresa to enjoy this book, although it may be a tough read for the former. I've always believed that Christopher Hitchens' goal is not to bring your thinking in line with his; rather, it is to provoke your thought, your investigation and, maybe later, your evaluation. He does this masterfully here."

Jay Young said: "About 10 years ago, I hated Christopher Hitchens, particularly for his attacks on Mother Teresa. Of course, I was uncritically relying on Bill Donahue's Catholic League for my views on the subject. I was convinced that Hitchens was launching a malicious, hateful attack on a woman who did more good than he ever did. As you may have guessed, my views have changed since then. …  Hitchens, however, definitely has assembled an incisive case against the idolization of Mother Teresa. The evidence is hard to argue against, and Hitchens only asks that her reputation by judged by her actions, not the other way around."

Hitchens provides a very sharp and strongly argued position for his opinions. She has been held in high regard for very questionable reasons, and with amazingly little positive evidence, and an unbelievable amount of (peculiarly discounted) negative evidence.

The details he provides of her financial dealings, and the depth of her relationships and engagements with very questionable people is beyond compelling and eye-opening.

Hitchens' book is a staggering indictment of the mythology that surrounds Mother Teresa. This is made more compelling by the time he spent with her, and his interviews with her. Remarks like the following provide a hint on her thinking:

"She assured me, that she wasn't working to alleviate poverty. She was working to expand the number of Catholics. She said: 'I'm not a social worker.'"

Bottom line: Hitchens will have raised the ire of many with this book, but no matter what your initial impressions or beliefs in her are, if you haven't read it, I suspect you aren't well-informed on the topic. Read it before you form an opinion of the book. Don't just believe the positive spin.