I teach SQL Server, BI, Azure, and AI classes on a fairly regular basis, and one thing I love to do is to show attendees images (or photos) of where the application of the technology has gone very right or very wrong. Ever since I'd installed Windows 10 though, that became much harder.

The Photos app that's installed with Windows 10 must have someone who loves it, but that's not me. There seems to be no way to just have it automatically maximize the images, so I'm always showing them, then having to resize them.

What I wanted is an app where I can double-click an image, and it would display it for me, maximized to whatever screen real estate I had available. The old Windows Photo Viewer did that to a reasonable extend, but the new Photos app in Windows 10 just seemed to have no way to do that simple task. I've seen a lot of articles by people desperate to reinstall the old Windows Photo Viewer. Microsoft has been making that harder and harder and even though you can get it working, it doesn't integrate with other things very well.

So the other day, I figured I'd just have to write an app that did what I wanted but thought I'd check the Windows Store first, and I'm glad I did. There's an awesome app called Basic Photo Viewer, and for those that hate paying for apps, even better, it's free. It has an option to upgrade to Pro but there's nothing in that for me at present.

UPDATE: The author of this awesome app let me know it's been renamed to Pictureflect Photo Viewer.

It worked so well, I was wondering where it had been all my life. Well at least since Windows 10.

I set it as my default program for viewing images in Windows, and when I double-click an image file now, I see this: 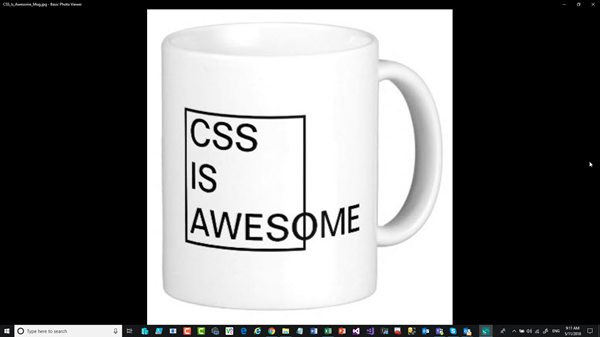 There's a nice clean image. If I click the mouse up near the top of the screen, the menu bar appears. The top left has this:

And the top right has this:

There were a few settings that I changed. I chose to hide all pro features (or oddly it lets you set things you can't use), and I chose to have a clean screen by using this option:

The app can also do things like display a slide show by showing all files in a particular folder with a configurable delay, etc. but for me, I just wanted a simple program that displays an image as well as it can, when I double-click the image.

I can't believe I put up with the other app for so long, and didn't go looking for a better one.

2 thoughts on “Basic Photo Viewer in Windows 10 – Where have you been?”