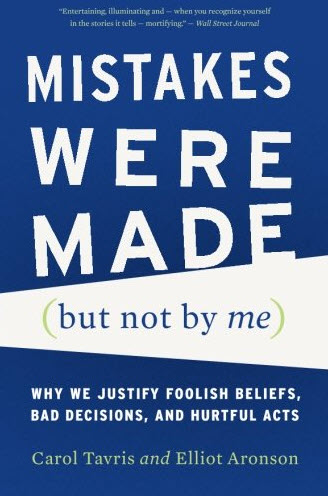 I've been listening to a lot of audio books lately and one that caught my eye was Mistakes were made (but not by me) by Carol Tavris and Elliot Aronson.

One of the mistakes that we all can make (and I've done it so many times myself) is to make a decision, find out it's wrong, but to then hang on to it for way too long.

It was fascinating (and probably a little depressing) how often I could recognize aspects of myself while reading this book.

There were many truly fascinating tales. The ones that most clearly stick in my mind though were about prosecutors who had pushed for a guilty plea in a murder case, later could not accept they were wrong even when the supposed victim turned up alive.

The book had a great discussion on cognitive dissonance.

The part of the book that I didn't love was the depressing section on the tragic stories about psychologists and the misconceived (and even evil) work around repressed childhood memories of sexual abuse. The point was well made but the book seemed to really belabor the point way too far.

Apart from that section which went on too long, I found the book fascinating.