I'm a big fan of Azure Data Factory (ADF), but one of the things you need to get used to with tools like this, is that the UI keeps changing over time. That makes it hard for several reasons:

I think Microsoft don't quite get how much blog posts, etc. supplement their own documentation.

It's the same with Power BI. I used to often teach a Power BI class on a Tuesday, as the second day of our week-long BI Core Skills class. And Tuesday was the day that Power BI changes would appear. So I'd be showing a class how to do something, and suddenly I'm trying to find where a tool I use regularly went.

So even people who work with these tools all the time, keep having odd moments where they go to click something they've used for ages, and it's just not there any more.

I had one of these moments the other day in ADF. I went to click on the menu item for "Discard all changes" and it had vanished. My mistake is that I kept looking through the menus and wondering where it went. I didn't notice that it had become a trash-can icon in the top-right of the screen.

So this is just a post for anyone else who's wondering where it went. (Or for someone following a tutorial or blog post and can't find the menu item). 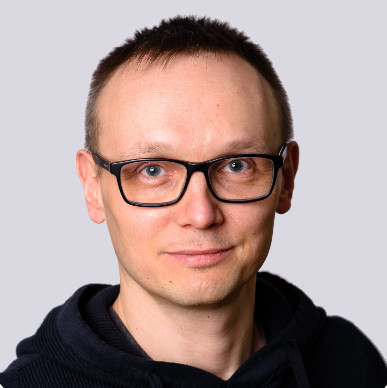 I recorded another podcast with an old friend recently. I met Kamil Nowinski in Poland when I was invited to speak at SQL Day. That event is on again this year, but as a virtual event only.

In our consulting work, we use Azure Data Factory frequently. Deploying it, can be a real challenge. Microsoft has a supplied method with ARM templates but that has issues. Kamil produced free tooling that's in the Azure Marketplace and makes it much easier to work with.

In this podcast, Kamil describes the overall process, and how the challenges arise with the Microsoft-supplied mechanism, and the way his tooling makes it easier.

If you want to understand more about Azure Data Factory (ADF) and how it interacts with source control, and deployment, this is a great show to listen to.

You'll find the podcast with Kamil (and all our other podcasts) here: https://podcast.sqldownunder.com 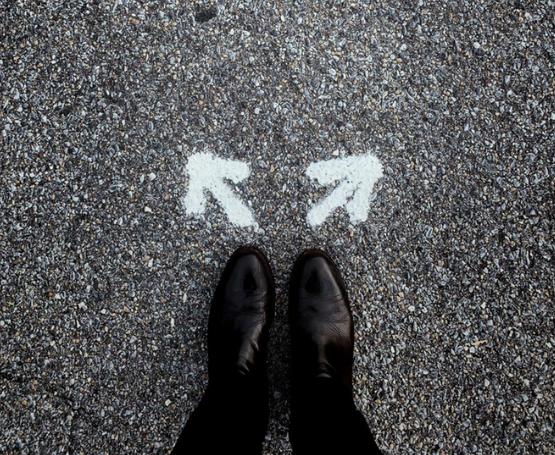 I recently recorded a podcast with Kamil Nowinsky. Kamil is well-known for creating some tools that make it easy to publish individual Azure Data Factory pipelines. It's a far better method that the standard ARM (Azure Resource Manager) template deployment that's provided by Microsoft.

However, if you use this method (and I recommend you do), you'll be publishing pipelines separate to the linked services that your datasets connect to.

One mistake I've seen a few clients making lately, is that when they created the linked services in different environments, they did so with slightly different names. Because of that, they needed to modify the deployed objects after deployment. You don't want to be doing that. 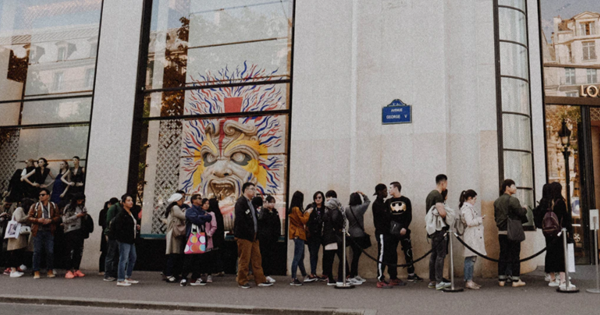 I love working with Azure Data Factory (ADF). There are times though, when I'm stuck wondering what's going on, and it takes me a moment to discover it.

One that had me puzzled recently was a Copy activity that just wouldn't seem to start. The pipeline had started ok. Previous activities in the pipeline had run just fine. But when it got to the Copy activity, it said "Queued" and just kept saying that seemingly endlessly.

The first thing to understand is that these copy activities access datasets that are connected to via linked services: 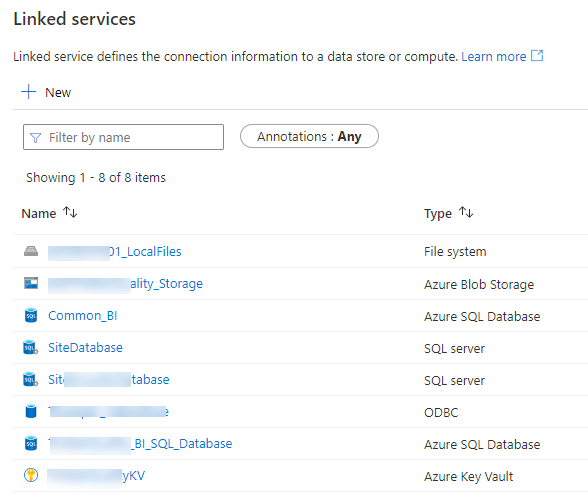 If we look at the properties of the types of linked services that we're copying to/from, you'll see that they in turn are accessed using Integration Runtimes. 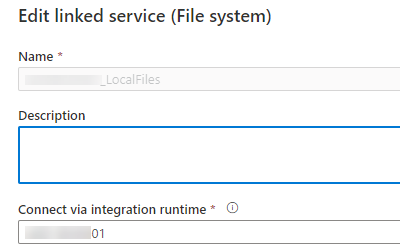 The integration runtimes have concurrency limits.

So one thing that could cause your Copy activity to queue is if the number of concurrent jobs was exceeding this limit.

However, in the case I'm talking about, this was the only Copy activity running.

What I should have checked was the Monitor for the linked shared integration runtime: 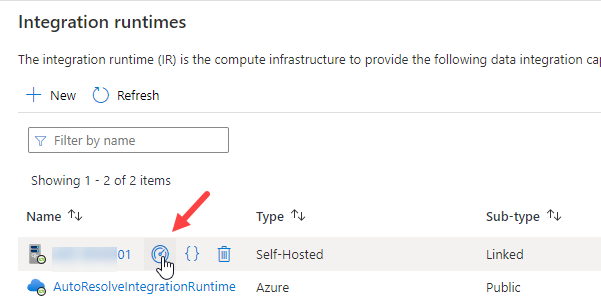 That would have shown the total of what was going on:

My Copy activity seemed to be queued for no reason. But of course there was a reason. Another data factory had a bug and was consuming all the available concurrency from the shared integration runtime. 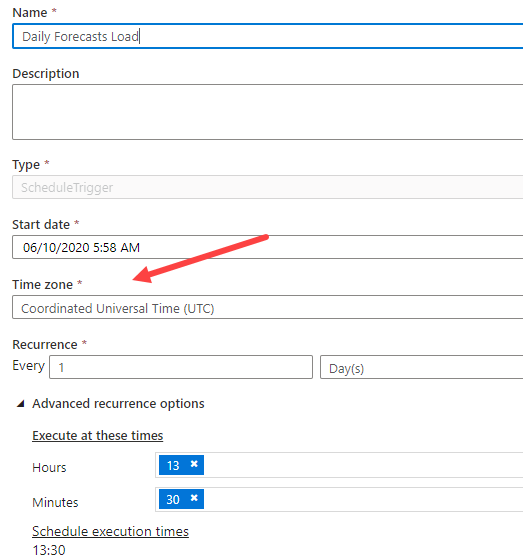 I work with a lot of technology on a daily basis, much of it amazing. But I still get excited when relatively small enhancements are made, and they make my life or development much better.

Timezone support in schedule triggers in Azure Data Factory is one of those changes.

In Data Factory, the most common type of trigger that we use is a schedule trigger. It's used to run a pipeline at a specific time or series of times. But one of the most painful aspects of these triggers is that they didn't have time zone support.

That meant that for a town like Melbourne or Sydney where daylight savings time applied, I couldn't set a pipeline to just run at say 2AM every day, Melbourne time. Every six months, I'd have to go in and change the trigger times to achieve that.

I'd also have to endlessly convert between our local times and UTC as that's the time that would be entered.

If you only have a few triggers, that might be OK, but when you have a lot of them, well that's painful.

When I looked at the JSON representation of the trigger, there was a time zone in there: 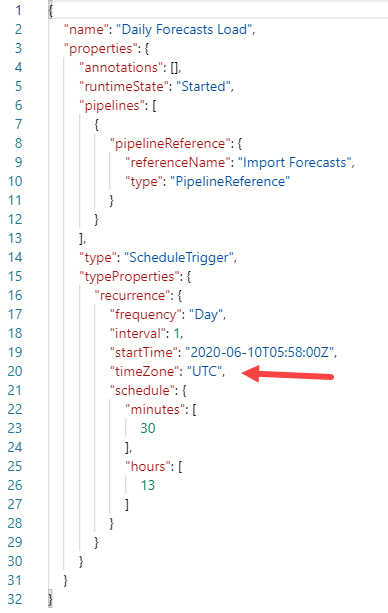 So I knew that whoever designed it meant for it to work. But ADF wouldn't support any other value than UTC.

In the last few days, we got the great news that time zones are now supported in these triggers.

You can see the option now in the UI: 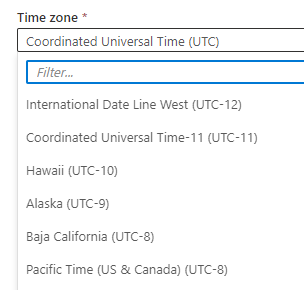 I can't tell you how pleased I am to see that there.

I've been working a lot with ADF (Azure Data Factory) again lately. If you've started to work with ADF and aren't using Git in conjunction with it, you need to change that now.

ADF objects are also represented as JSON objects and lend themselves nicely to being stored in Git.

Another key advantage is that if you don't have Git connected, when you're working with ADF, you don't have a Save button. If you're part way through making changes, you can either Publish them or Discard All. When you have Git in place, you get an option to Save.

NOTE: If I'm working at a site that doesn't have Git connected, if I need to temporarily stop working on something, what I can do is get the JSON code for the pipeline (or whatever I'm working on), save it away manually, then discard my changes. At least I can then put it back again later. But that's basically what the Git option does for you anyway, so just use it.

Changing or Removing the Git Connection

Today was the first time I'd needed to change the Git connection across to another repository. And it took me a while to work out how. You'll notice that in the main editing window, there's no option to change it:

Now I think it should be there. But if not, it should be on the Properties page for the ADF instance. But it's not there either:

Now I think it should be in one of those two locations.

So where is it?

In one of the least obvious bits of UI ever created, it's tucked up in the top right corner of the Dashboard. That's the last place I would have looked. That page is usually useless to me. It's great if you've just started, as it has lots of links to tutorials, etc. but otherwise, not so interesting. But that's precisely where the option is:

I hope that helps someone.