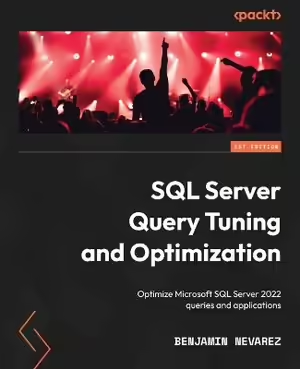 I was pleased to be sent a pre-release copy of Benjamin Nevarez's new book SQL Server Query Tuning and Optimization. Last time, I reviewed his High Performance SQL Server book.

This book seems to be somewhat new and somewhat an update, but this time with the main focus on query tuning and optimization. That's pleasing as the main way to get better performance out of SQL Server is to fix the queries. much more so than anything to do with the hardware or server configurations that so many people focus on.

And once again, I wasn't disappointed.

The book covers a rich set of topics, including most things you need to know when performing query optimization for SQL Server. It provides a detailed background to each area, and then recommendations on how to proceed.

Once again, it was so pleasing to read a technical book that was well written, used English well, and  wasn't full of technical errors. Nowadays, there aren't many technical books that fall into this category. Several times lately, I've been sent technical books for review, and I've ended up telling the publisher that they don't want me to write a review as those books were so poorly written. It's important to support people who are still writing quality technical books.

Now, were there again areas that I disagreed with Benjamin on?

I just don't share the enthusiasm for the in-memory OLTP options in SQL Server, even for temporary objects. I wish it wasn't so, but I've spent so much time trying them over the years, and let's just say, I don't use them. The SQL Server team spent so much money on their in-memory OLTP and in its current form, even in SQL Server 2022, it just doesn't deliver. I think it's one of Bob Ward (product team)'s dreams to ever have me happy with it, but that's not happened yet. It shines in a few very niche areas, but for most customers, I tell them to avoid it.

Another area that I'd also differ on now is the Data Collector. I really don't think this has much future. Benjamin covers it still in this version of the book, but I'd strongly suggest that customers give it a miss.

Were there again areas where I'd love to see the book improved?

Here are some suggestions:

It should be released very soon: https://packt.link/AbvGr

If you'd like to learn much more about tracing queries and improving your T-SQL, check out our online courses at https://training.sqldownunder.com