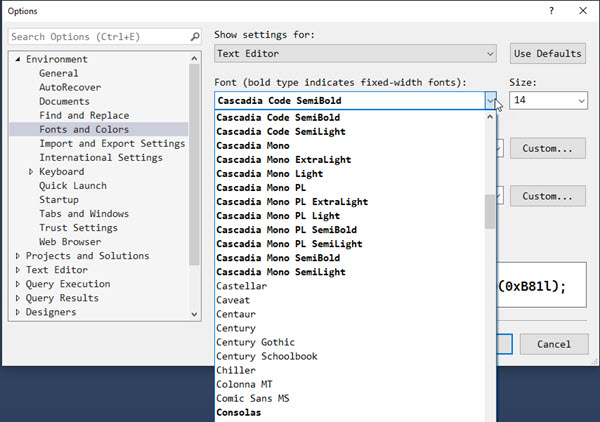 The good news is that Visual Studio 2022 has been announced, and if you haven't read the announcements, the big deal is that it's finally a 64 bit tool. You can still build 32 bit apps with it, but the tool is now 64 bit. I hope SQL Server Management Server (SSMS) will also follow it to 64 bit but that's not likely to be known as yet.

However, one interesting part of the announcement is a new font designed to be used for development. It's called Cascadia Code. And even though Visual Studio 2022 isn't available yet, the font is. I've been trying it in SSMS and quite like it. Previously I was using Consolas.

It's easy to install. Here are the steps:

Using the fonts in SSMS is easy. From the Tools menu, click Options.

Now the fonts will be available in the drop-down list for Font.

You'll then see a list similar to what's in the main image above. Note that fonts that are shown bold are fonts with fixed spacing (i.e. not proportional fonts), and that's usually what I want when doing development.

6 thoughts on “SQL: Try the new Cascadia Code as a font in SSMS”