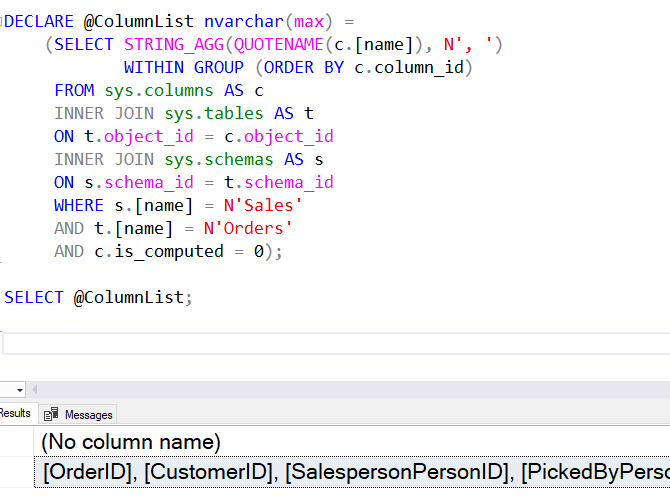 I often need to create a list of columns for a table. Sometimes it's because I'm generating scripts but there are other times that I need it for dynamic code.

Let's use WideWorldImporters as a sample. Imagine I need to get a list of columns for the Sales.Orders table.

I've seen people doing this the wrong way. They try to use a SELECT statement that joins a variable to itself like this:

There are several things wrong with this.

First, if you're scripting, you should always use QUOTENAME to put quotes around object names when you're generating them in script. I don't love having to quote them all. I do wish there was a QUOTE_NAME_IF_NEEDED function instead. It could automatically quote names with spaces, invalid characters, reserved words, etc. I've asked Microsoft for this a number of times. It would greatly improve scripting.

But the bigger issue is that concatenating a string like this with a SELECT has several ways it can go wrong. It's a good example of code that seems to work when you tested it, but might break later.

As long as you're on the SQL Server 2017 or later versions of T-SQL, the STRING_AGG function is perfect for this.

It will work reliably and do what's required. Note that aggregates like this aren't normally ordered, and so to get the required output order, I've used the WITHIN GROUP clause. You could just change c.column_id to c.[name] if you want to order the columns alphabetically.

Now, if you're on an earlier version of SQL Server, for reliable code, I'd be selecting the column list into a table variable, then using a loop to aggregate it from there. That would also be reliable, albeit a bit slower.