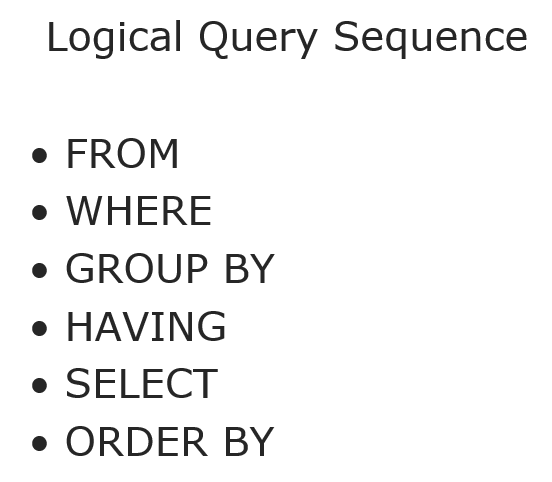 It's unfortunate that the SELECT query in SQL isn't written in the order that operations logically occur (if not physically). I suspect that's one of the things that makes learning SQL a bit harder than it needs to be.

Without getting into really complex queries, you need to understand the logical order of the operations.

The starting point is to determine where the data is coming from. This is normally a table but it could be other sets of rows like views or table expressions.

This clause is the initial filtering of the data that was retrieved in the FROM clause. This is all about finding the rows that need to be considered in the query.

This clause is about summarizing or aggregating the rows. We determine the columns that will be used for grouping. The SELECT column will normally later have these grouping columns so that you can make sense of the output. The SELECT might also have other columns but only if they are aggregated via MIN, MAX, AVG, etc.

The SELECT clause is about deciding which columns or aggregates need to be returned. Formally it's often called a projection of the data. Columns or aggregates can also be aliased at this point (i.e. given another name). If you notice how late in the logical order the SELECT clause is, you might realize that this is why an alias can be used later in an ORDER BY but not in any of the previous clauses.

SQL queries don't have any default order. If you want data returned in a specific order, then you need to specify the columns or aggregates that you want to order the output by.

It's really important you start to have this picture in your head of the order that queries are logically sequenced.