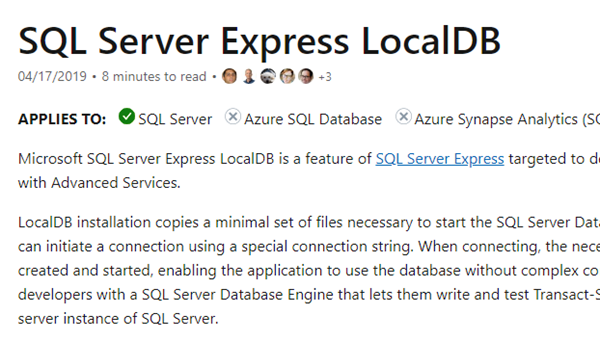 I keep hearing questions from developers about the difference between SQL Server Express Edition and LocalDB. One asked me the other day:

What's the difference between connecting to .\SQLEXPRESS and (localdb)\v11.0 ?

SQL Express (it's really SQL Server Express Edition) is a service-based version of SQL Server i.e. it runs as a service all the time, independently of other applications. When you say .\SQLEXPRESS you are looking for a named instance of SQL Server called "SQLEXPRESS" that is on your local machine and connected to via a shared memory interface (that's what the dot is).

Local DB is a deployment option for SQL Express that runs as an attached process to another application, instead of as a service. It makes it easier to deploy applications like Visual Studio that need a copy of SQL Server locally but don't want to be heavy-handed by installing a service as well as the IDE. You can read about LocalDB here.

Visual Studio also just needs to use a SQL Server for a while during development, but doesn't need it running all the time. When you connect to "(localdb)\v11.0" you are connecting to one of these attached instances, and in this case using version 11. When you start it by accessing it from within Visual Studio, it shuts down again when you close Visual Studio.

It doesn't have to be attached to Visual Studio though. You could attach it to your own application. You can also have multiple versions of localdb on the same machine.

You can even start and stop Local DB separately from applications like Visual Studio. The SqlLocalDB Utility can be used to manage the lifetime (starting and stopping) of Local DB. You can read about it and the functions that it offers, here.