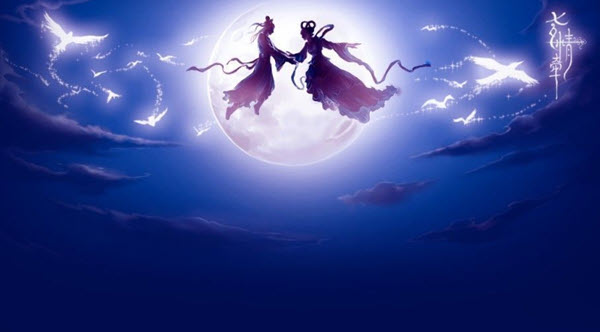 It's not a simple question to answer. More and more young Chinese do get involved with the Western Valentine's Day (February 14th). Other Western festivals are also being adopted. Even though Chinese New Year is still the most important, many Chinese now celebrate Christmas (圣诞节 Shèngdàn jié).

Traditionally, the equivalent of Valentine's Day is 七夕节 (Qīxì jié) or the "Qīxì Festival". It means "Evening of Sevens".

You'll also hear it referred to as 乞巧节 (Qǐqiǎo jié) or the "Qi Qiao Festival". That means "Beseeching skills".

The festival is held on the 7th day of the 7th month in the Chinese calendar. Because of this, you might also hear it called the "Double Seventh Festival". The naming of that is similar to the naming of "Double One Double One" for "Singles Day" on 11th November.

St Valentine isn't associated with this festival. It's originally from a romantic legend that's called "The cowherd and weaver girl". It telsl the tale of Niulang (the cowherd), and Zhinü (the weaver girl).

China isn't the only country with this festival. Japan has the Tanabata festival, and Korea has the Chilseok festival, based essentially on the same story.

The main participants in the associated rituals are young girls, and the original aim of the activities was to "pray for skills". At the time, they were talking about making handicrafts, needlework, and offering fruit sacrifices. That's where the "Beseeching skills" name came from.

There's a celestial aspect to this as well. The two lovers were represented by the stars Vega and Altair in the Milky Way, and another star forms a "bridge" between them. The "bridge" represented a flock of magpies in the original story.

I'll write more about the cowherd and weaver girl in my next post.