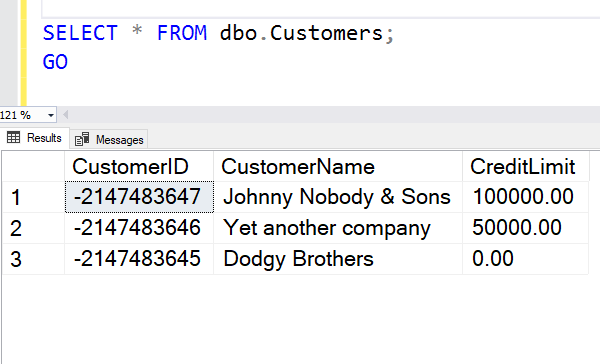 This week, one of my colleagues was complaining that he had to do work on a database where every table had identity columns, and they all started at large negative values.

I remember some people promoting this years ago, to double the available numeric range for the data types, rather than just using positive values.

Let's take a quick look at an example:

The output from that is shown in the main image above.

There are freaks of nature who can remember numbers like this, but I'm certainly not one of them, and I'm not alone.

Worse, they had consistently applied this "technique" across the entire database, even on tables that only ever had a couple of hundred rows. So they've made maintenance on the tables much harder, for no reason at all.

And if you're using sequences instead (like we mostly do), don't do it there either. You also don't need to squeeze the last value out and use zero either.

Finally, it's important to consider that these large negative values don't compress as well, so if you're using at least row compression (which you should all be using at a minimum), the values are a problem for that too.

So look, please just don't do this.