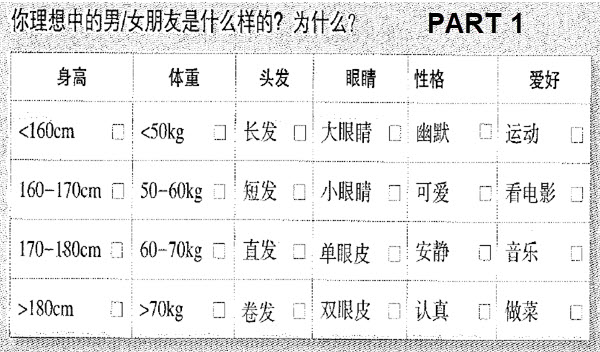 I've found over the years that you can learn a lot about a culture, based on which things the people in that culture think matter. I had a quiet chuckle when I saw the quiz in the main image above.

The first column is likely obvious:

身高 (Shēngāo) which means "height" (literally "body tall") and the choices are as expected.

The second column is obvious from the English as well:

体重 (Tǐzhòng) which means "weight" (literally "body weight") and again the choices are obvious, if not just a little on the light side for many Westerners 🙂

The third column is 头发 (Tóufǎ) which means "hair" (literally "head hair"). The choices are:

The fourth column is 眼睛 (Yǎnjīng) for "eyes". You might have guessed that eyes would come into it, but in Western countries, you'd guess the choices were colours like "Blue", "Green", "Brown", etc.

Not in this quiz. The choices are:

In the next post, I'll continue with the other two columns. See if you can guess what they'll be.