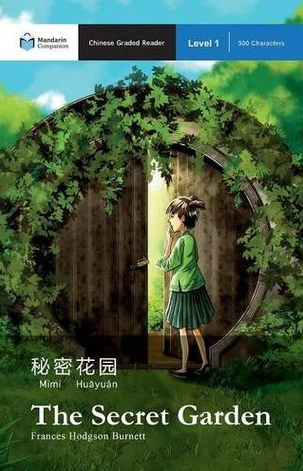 It's an adaptation of a classic tale. In this version, a young girl who isn't happy with her life (her parents don't seem to care for her), gets up one day to find they and their friends who had been visiting are all dead from a mystery illness.

She's sent to live with her uncle who has a grand house but seems pretty cold. We learn that's because he's sad that his wife died. And his son is a very sickly boy. His wife had a garden that she loved but he'd closed it up and kept everyone out.

But the young girl (Li Ye) finds the garden with the help of a small bird and a friend, takes the sickly son there and he progressively gets better.

It's a great story, and I was even more excited to find they've released this series of books as audio books as well, so I've started listening to the same book.

I thoroughly enjoyed this book. It's another book that's written using only basic (almost childlike) language but still has an interesting story.

Note: as an Amazon Associate I earn (a pittance) from qualifying purchases but whether or not I recommend a book is unrelated to this. One day it might just help cover some of my site costs. (But given the rate, that's not really likely anyway).