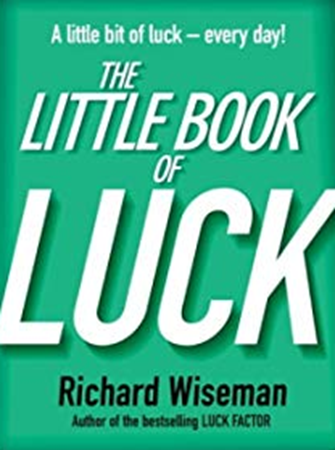 One of the things that I love about digital books and audio books is how quickly I can go from a friend talking about one, to actually having it. This book is one of those. I can't actually remember who recommended this one but I recall looking it up immediately and purchasing it. It's The Little Book of Luck by Richard Wiseman.

Wiseman is a professor for public understanding of psychology in the UK. He states his interests as "unusual areas including deception, luck, humour, and the paranormal".

I don't share his interest in the paranormal. While it can mean things that are just quite out of the ordinary, the common usage of paranormal now tends to be things that aren't able to easily explained (at least right now), and that seem to break things like the laws of nature. I don't see any concrete evidence for any of those.

However, this book tackled "luck".

I've spent quite a bit of time in Asian communities over the last decade and "luck" is something that all these communities seem to have a profound belief in, and seek out. Try selling a house number 24 to a Chinese person compared to selling them a house number 8. Lots of "luck" with that.

Clearly, I don't believe that "luck" is a thing. And while Wiseman doesn't come out and say that directly, he does give plenty of hints that what appears to be luck is often just a positive view of something that's happened.

I like the way that the book talks about ways to view the world, and basically, building an optimistic outlook all the time.

It's only a short book and while you could read the whole thing in half an hour if you rushed through it, it's worth spending some time contemplating his ideas.

I didn't expect to but I did enjoy reading this small book,  and it's a pretty easy read. I was really expecting more but it might be just the thing to brighten your day.