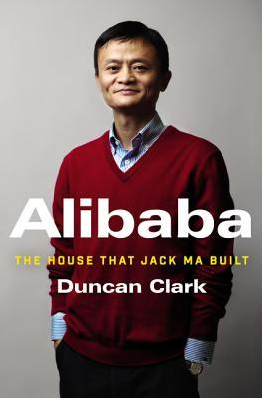 You probably already know that I've been learning Mandarin for about 8 years now, and have a fascination with Chinese business and technology. Learning the language has made this more approachable for me.  The story of Jack Ma and Alibaba is one of the really interesting aspects of Chinese business today, so I was intrigued to read this book:

Alibaba: The House that Jack Ma Built by Duncan Hall

I ended up listening to the book via Audible rather than reading it.

Duncan Hall seems well placed to comment on this business. He was an early advisor to Jack Ma. He hasn't worked directly for Jack but he has obviously been close enough to watch the company closely.

The book is well written and explores much of Jack's younger days and shows a lot of detail about where his thinking is likely to have come from. I was particularly fascinated by his deep connections to Australia. I wasn't aware that he'd lived in Newcastle (New South Wales) for many months.

Duncan said he'd been living in China since the 1990's and this has given me great insights into the cultural issues that have helped Alibaba to flourish.

Given how long he's lived in China, I'm sure Duncan has a great grasp of the language by now. I really wish he had narrated the book himself.  Jim Meskimen is the book's narrator and while Jim has a great clear voice for narration, I struggled with the constant mangling of the Chinese words that were in the book.

For example, the word Xiao in the company name Xiao Mi is pronounced like the "Show" part of "Shower", not like something starting with "Zh". And it took me a while to realize when he said something that sounded like "Nerr Peng You" that he meant "girlfriend", which is pronounced more like the English "New Pung Yo".

This book is quite fascinating and if you aren't already familiar with Alibaba and Jack Ma, I highly commend it to you. While things could always change, it's hard to describe how important they are likely to be in the new world order. If you don't know about them now, I'm sure you will in the future.